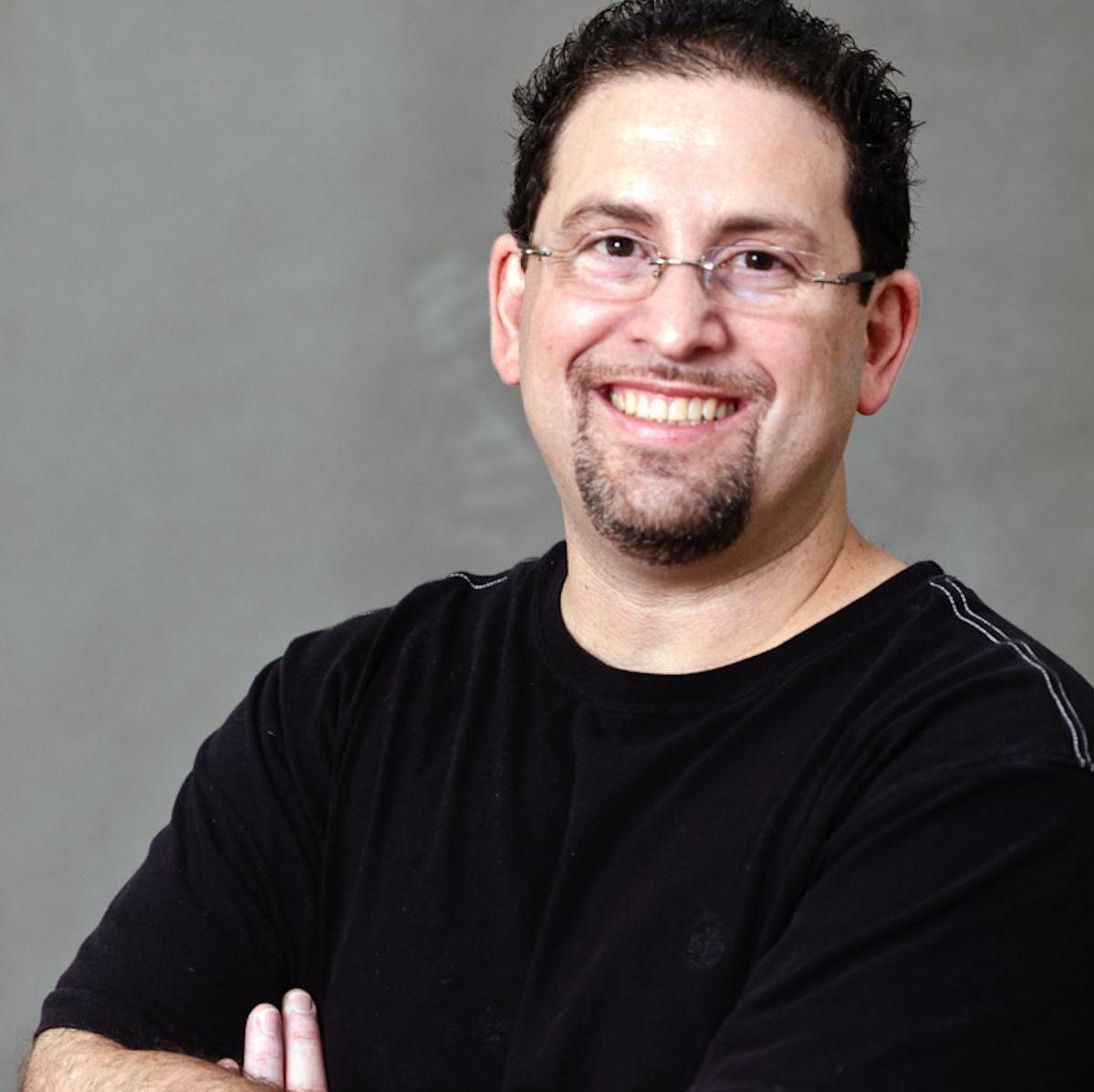 Tao Of The Auto-Correct

I recently made the following statement across most of my social networks:

Confession: I often type a word knowing full well it’s spelled incorrectly but try to get it close enough so spellcheck will figure it out

While many of the responses were commiseration, I got an amazing response from Shivi Isman, good friend and a strategic communication consultant:

Isn’t that how most of us go about life in general? Trying to do our best knowing full well it’s not perfect but settle for “close enough” hoping things will somehow fix themselves and it will all turn good?

Doesn’t that sum it up? If that weren’t enough, she followed it up with this gem:

Well, the flip side of this – also, just like life in general, is all these times you try hard to spell something right, and the stupid auto correct makes a mess out of it…

So there you have it. The Tao of the Auto-Correct.

Economics Of My Old CD Collection

Is a fair price what you think is fair, or what someone else is willing to pay?

Permit me a mild rant…

What Is A Fair Price?

I recently started going through some of my old CD‘s to rip onto my computer. There was a lot of good stuff and plenty of “what was I thinking” stuff. It struck me that I had purchased many of these CD’s — in that pre-iTunes world — for only one song. Sound familiar?

On the face of it, I paid a 1400% premium for the “value” of the one song I really wanted to purchase. Did I think it was fair? No. But I was willing to pay it because I had no alternative.

Looking back, how can I look at the music industry in any way other than the tremendous profits they reaped because of our willingness to overpay? The fundamental nature of the product itself — a song — hasn’t changed, but there has been a disruption in the delivery model that’s changed the economics of the music industry. Innovation in the industry narrowed the gap between what I thought was fair and what I was willing to pay.

What other  industries are ripe for disruption because of “broken economics?”

12 Most Essential Principles For A Long and Happy Marriage

I was inspired to write this by my recent wedding anniversary and dedicate this to my best friend and wife, Jennie. Over the years we are often asked by others – and frequently discuss with each other – what it is that makes a successful marriage. Building and maintaining mutual respect has been a cornerstone of our relationship.

What follows are some of the principles we try to live by. I’m no expert. All I have is my experience. These are (mostly) small things, but they add up to big things.

It sounds corny, but it’s important. Relationships are about mutual respect. Don’t underestimate the value of simple courtesy and sincere appreciation.

We all lead busy, complex lives. A marriage is about sharing your life with another person. When I first met my wife, we’d constantly talk about big hopes and dreams, and the minutiae of our lives. Now there are jobs, kids and obligations. Asking this question says “you are still important to me and I want to know what’s going on in your life.” Make it a point to connect. It may not be too often or for long periods of time. It just has to be sincere.

There’s the old joke that newlyweds should put a penny in a jar every time they have sex the first year of marriage, then take one out each time thereafter, and they’ll never empty the jar. The same is true for praise. Continuing to show admiration for each other is just as rewarding in its own way. You don’t have to go out of your way to look for opportunities for praise, but if you think it, say it.

Take a moment on a regular basis to recognize – for yourself – what you enjoy about your relationship. Consider the qualities that first attracted you to each other and how you are connected.

I’m not talking about tricking yourself into believing everything is great. Nobody is perfect. Everyone has warts. This is about having a little perspective. Don’t sweat the small stuff.

6. Recognize the underlying source of conflict

In the technology business we had a saying: “the problem is never where you think it is.” Very often the source of conflict in your relationship is something OTHER than each other. Take time to identify the real source. You may be fighting with the very person who can help you most.

Don’t keep resentment bottled up. It may hurt to get it out, but it will be worse if you don’t. Keep it civil and respectful. It also helps small misunderstandings stay small.

Total honesty is almost as bad as intentional deceit. Be aware of context and magnitude, and most important, intent.

9. Take care of yourself first

This is not to say you should be selfish. Just think about why in an airplane they tell you to put your mask on first before you help your child. To be a supportive partner you need to be in a good place yourself. Sacrificing too much of yourself breeds resentment (see No. 7).

Sincere apologies take a great deal of “emotional energy”, which is usually in short supply in our complex lives. In my experience, the extra effort goes a long way.

11. You don’t have to do EVERYTHING together

There’s no ONE relationship that can satisfy all your needs. There are people in your life whose friendship and support give you things you don’t (and shouldn’t) expect from your spouse. The flip-side is realizing that it’s ok to pursue different interests. My wife and I enjoy many common interests, but allowing each some “personal” time is just as important.

12. Be willing to renegotiate the contract

This is the hardest part. You made a social contract when you started your relationship. It included where you would live, if/when you’d have children, who would take care of them, work, careers – the list goes on. Relationships are fluid. People grow and change. Life doesn’t always go as planned. Life’s bends and turns – children, job and career changes, illnesses – these all put stress on a relationship. That contract you negotiated when you first met may need some updating. Recognize that you will need to revise and renegotiate this contract over time, as both your needs change.

At its heart, marriage is an agreement between two individuals to share their lives with each other. It all started with a connection. Remembering the basis for your connection, practicing simple courtesies, and keeping in mind we all change over time keeps your relationship dynamic and satisfying.

I’m looking forward to many more “Happy Anniversary’s” with my best friend.  What works for you?

They say those who fail to study history are doomed to repeat it. Cleaning out my office I ran across this June 2000 copy of Alley Cat News

with this great ad by a high-flying Dot.com law firm (now defunct as well). 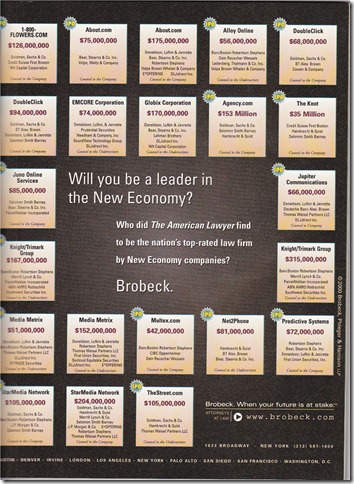 As Silicon Alley experiences a rebirth and we move into the Social Media Bubble, take a look at some of the Dot bomb leaders. How many of today’s high flyers will still be around 10 years from now?

Thanks, But… Retweets Revisited

Let’s be honest here: we are all flattered when someone chooses to tweet or retweet our content. It tells us someone thought it was not only good enough to read, but good enough to share. It’s part of the Twitterverse dynamic.

I suppose I like being thanked for retweeting someone’s content. It’s nice, but very often it happens as part of a bulk “thank you.” What follows is a series of still more TY tweets saying the equivalent of “you’re welcome” that I have to work my way through because the thank-ers included the whole list of thank-ees. Does that whole process feel as hollow for you as it does for me?

There is an old SEO saying that “the Internet hates dead ends.” A “thank you” alone is, to a certain extent, a dead end. A one-way acknowledgement. So I propose an alternative:

What if we stop thanking people for retweets or mentions on Twitter?

Instead, try to find their content to promote or retweet. Yeah, I know it takes a little extra effort, but doesn’t it make more sense? Isn’t the ultimate goal of social media to make connections and engage more? Who’s with me?